The annual Rotary Thanksgiving Football Luncheon was held on November 24, 2009 with the senior members of both schools football teams. The festivities included remarks from both Shelton Coach Jeff Roy and Derby Coach Carmen DiCenso who would be coaching his final game at Derby on Thanksgiving. Here is a story from Tony Spinelli of the Valley Independent Sentinel:

First the seniors from the Shelton High School football team burst through the door at the Russian Lodge catering hall on Howe Avenue, looking pumped and ready. Then the seniors from the Derby High School/Emmett O’Brien Tech team strode in, with that same confident swagger.But they weren’t there to play football or argue about their longstanding rivalry for Thanksgiving Day, when they are set to clash at 10:30 a.m. at the Ryan sports complex at Derby High. They wore shirts and ties, and were intent on enjoying a pre-Thanksgiving luncheon, all paid for by the local Rotary Club.

It’s a Valley football tradition that goes back to at least the late 1930s. No other rival teams in the Valley, perhaps the state, have one of these luncheons. Gathering seniors from the opposing teams for a friendly banquet before the big rivalry game of the year is actually a good one to Google. “We don’t know of any other rivals in the country that do it, where the football players sit down together before a game,” said Stephen Balog, past president of the Derby/Shelton Rotary Club and chairman of event, called the annual Thanksgiving Day High School Football Luncheon.

At one time the local Kiwanis Club took the teams to Yankee Stadium to see the Yankees for a game and a steak dinner. Over time, the event evolved into a joint luncheon sposnored by both the Kiwanis and Rotary Clubs. The Kiwanis Club eventually dissolved, though, so the Rotarians have been carrying the ball. Each year, at least 100 senior players, senior cheerleaders, coaches and community leaders including Mayor Tony Staffieri of Derby and Mayor Mark A. Lauretti of Shelton attend the event. The food at the Russian Lodge is prepared by David M. Grant caterers, owned by the Valley’s leading philanthropists. “I’ve been doing this eight years, years, and the Rotary Club has been doing this maybe 50, 60 years, we don’t really know that. It’s a wonderful event, we think it’s worthwhile,” Balog said.

Derby and Shelton have been at each other’s necks on Thanksgiving Day since 1905, possibly even 1904, although the 1904 game featured some freshmen from Yale University on the Derby side, so possibly that one didn’t count, said Jack Walsh, president and chief operating officer of the Valley United Way. Walsh was emcee of the event Tuesday, as he has been for years. He has done a lot of research on the history of the neighbor city rivalry. “Well, this has been a long rivalry. I wouldn’t call it a bitter rivalry, I’d call it a friendly rivalry,” Walsh said, just before the event began. Derby and Shelton are joined at the Housatonic River by the Derby/Shelton Bridge, which links their two downtown districts. “We bring the players together to celebrate the year and the game,” Walsh said. “They are enemies for that one day, but for the rest of their lives they’ll be friends. That’s what we try to promote.”

Shelton is going into the Thanksgiving Day game, called the Silver Turkey Bowl, with a record of 6-3. Derby/O’Brien Tech walks in with a record of 4-5. “It’s exciting. It’s a big rivalry,” said John Niski, Shelton’s athletic director. “We expect a couple of thousand people if the weather forecast is good. It’s one of the biggest crowds of the season.”

It’s a great tradition, said John Saccu, 57, of Derby, who played center for the Derby team 40 years ago. “It’s been exactly 40 years since I attended this luncheon, and 40 years since we played in the great Thanksgiving Day game. It’s an honor for me to be here,” said Saccu, who spoke during the luncheon.

At the luncheon, players scarfed broiled chicken breast and roast prime rib and put away the aggression they show on the field. There was a little competitive tension, though. “It stokes the rivalry, but it builds camaraderie because in the two great traditions there are great similiarites,” Saccu said. Playing in a Thanksgiving Day game is a highlight of a high school player’s year, unless his team wins the championship.

The players get probably the biggest rush of the year on Thanksgiving Day. It’s considered to be the 99th annual game, or perhaps the 98th.

“They are exciting,” said Angelo DiSorbo, a senior on the Derby team. “All these people come to these games. There’s a lot of emotion.”

Check out the video from the Valley Independent Sentinel:

Listen to this inspirational talk from Derby alum John Saccu: 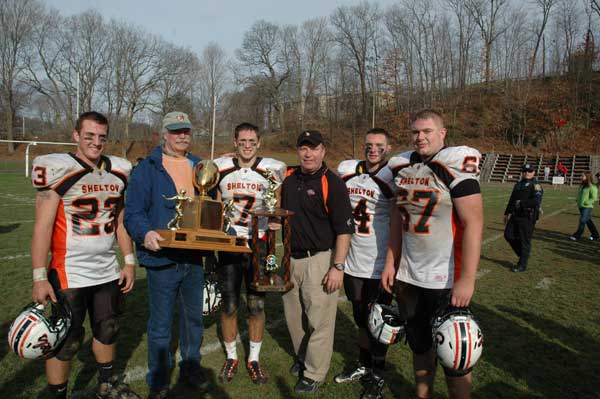