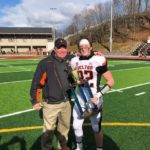 The annual Derby/Shelton Football game doesn’t have a Most Valuable Player Award. Instead, it has a tradition all its own in the form of the “Silver Turkey Award” which has been presented every year since the defunct Suburban News first presented the award. The tradition has been carried on by The Valley Times and Valley Publishing.

The award has been given 52 times so far with Shelton players winning 33 times to Derby’s 19. Only eight underclassmen have ever won the award. In 2018, Jake Roberts became the third player to win the award twice following Jeff Schultz  in 2006 and 2007 and Mark Piccirillo in 2012 and 2013. Running backs have dominated the award having won the award 20 times. Quarterbacks are next with eleven winners. Shelton players had won the award for seven straight years and ten of the last twelve, until Derby’s Ray Kreiger broke the streak in 2011.

We want to thank Bill Pucci, former editor of the Valley Times for providing the listing below.