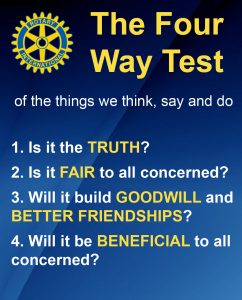 According to the “Tercentenary Pictorial and History of the Lower Naugatuck Valley” …. “The Derby-Shelton Rotary Club came into existence with appropriate institutional ceremonies, including a banquet, at the Hotel Clark, Derby, on the night of May 17, 1927, thus becoming club member 2,613 of Rotary International. The eight years of existence have been successful from the club standpoint. Much has been accomplished and the club has taken its place among the other organizations in the associated cities which are devoted to service work of various kinds.”

Its welfare and service work has become generally known and besides contributing to various educational projects, it provides worthy boys with vacations at the Boy Scout camp and in other ways takes a useful part in the activities of the community. John Duncan of New Haven has been adviser of the club since organization and is a regular attendant at its meetings which are held every Thursday noon in the Hotel Clark, Derby.”

Thanks to current member and former Derby-Shelton Rotary President Troy Adcox we know who the original members of the club were, and where they worked. Click here to see the full list.

The Derby-Shelton Rotary Club is still a key institution in the Valley today as it is into it’s ninth decade of service to the cities of Derby and Shelton.

Here’s a video history of the early years of Rotary International: