The Derby/Shelton Rotary Club celebrated one of its oldest traditions on November 20 when it played host to the senior members of the Derby and Shelton football teams and cheerleading squads at its annual Thanksgiving day Football Luncheon. The event was held at the Russian Lodge in Shelton. The event has been around for decades in one form or another, but has been hosted exclusively by the Rotary Club for more than 25 years.

Each year, the Club invites the coaches and senior members of the schools to break bread only days before their heated rivalry on Thanksgiving morning. This year’s game will mark the 97th meeting between the cross-rive rivals in a series that dates back to either 1905 or 1905 depending on whom you ask. Unofficial records have Shelton leading the series by a 46-43 margin with 7 games ending in ties. The game has been played every year since 1922, though inclement weather (including the last two years) has sometimes postponed the games from their scheduled Thanksgiving day.

Shelton enters this year’s game, which will be played at Derby’s Ryan Field, with a record of 8-1 and a trip to the State LL playoffs guaranteed with a win. Derby is 3-6 and will be playing for pride in an effort to break Shelton’s current 4 game winning streak in the series. Derby last won in 2002 by a score of 13-12.

Rotarian Jack Walsh served as master of ceremonies for the event. Following the introduction of the senior cheerleading squads, Derby alumnus Mark Tilki addressed the audience and told of his families cross town ties. His parents were from Shelton where his father played football and his mother was a cheerleader. All of the Tilki children played football at Derby High School! Tilki was followed by Shelton grad Brad Piccirillo who is also a current member of the Shelton High School coaching staff. He spoke of the importance of the game in his life and the lessons to be learned from playing football.

The coaches, Carmen Dicenso of Derby and Jeff Roy of Shelton, then summarized their seasons and introduced the senior members of their squads in attendance. Bill Pucci, Sports Editor of the Valley Times, wrapped up the speaking program giving a short history of the Silver Turkey Award which will be presented to the most valuable player in Thursday’s game.

Other dignitaries on hand for this year’s luncheon included Mayors Mark Lauretti of Shelton and Anthony Staffieri of Derby. Shelton School Superintendent Robin Willink was on hand as was SHS Headmaster Don Ramia. DHS Principal Mike Novia was also in attendance. The Athletic Directors of both schools, John Nitski of Shelton and Joe Orazietti of Derby, were also present. 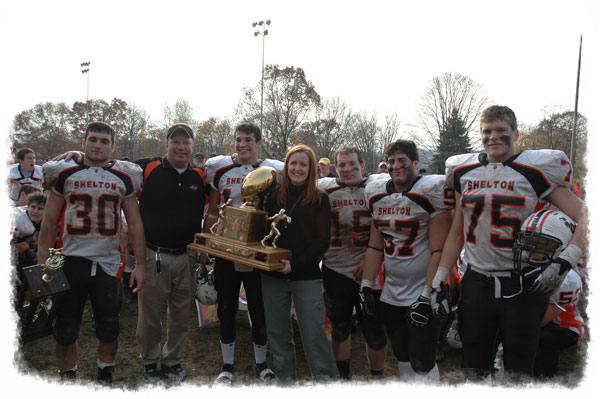 At the conclusion of the game on Thursday, President Kate Marks presented the winning Shelton team  with the Rotary Club Trophy. The winner of the game gets to keep possession of the trophy for the year. The first team to win 10 games gains permanent possession of the trophy. This tradition dates back to the 1930’s when the first trophy was known as the Shelton Looms Trophy. Shelton currently leads in the race with 8 wins and a tie to Derby’s one win.