The Derby/Shelton Rotary Club continued one of its great traditions on Tuesday, November 20, 2012 when they hosted the senior members of the Derby and Shelton High School football and cheerleading squads. The rivalry dates back more than 100 years, and the Rotary Club honors the friendly rivalry by bringing everyone together to break bread prior to the game. This year’s game will be played in Shelton on Thanksgiving morning at 10:30 am.

Rotarian Ed Sheehy, who played for Derby High School in the game years ago, served as Master of Ceremonies for the event. The two head coaches spoke briefly and introduced their players and also their guest speakers. Glenn Gaetano was the Derby alum while Ken Roberts spoke for Shelton. 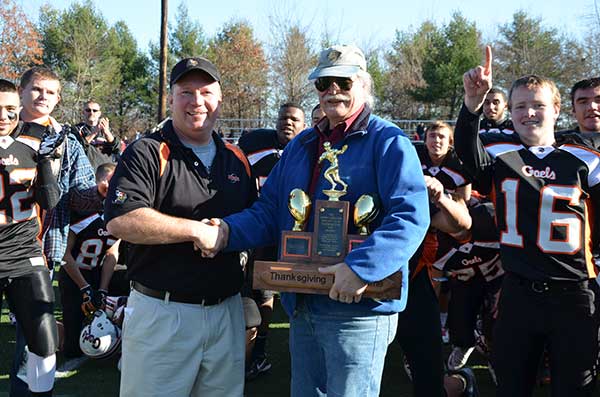 Steve Balog, past president of the Derby/Shelton Rotary Club hands the Rotary trophy to Shelton coach Jeff Roy following one of the closest, most exciting games in the long history of the series.