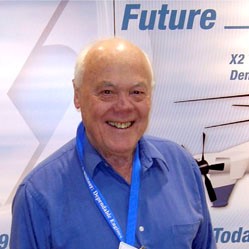 The Norman K. Parsells Award is presented annually to honor the memory and spirit of Norm Parsell, a dedicated Rotarian who served his community and Rotary, demonstrating Rotary’s ideal of “Service Above Self”. The recipients of the Award personify the same spirit and dedication to their community and Rotary that Norm represented during his lifetime. Clubs in Areas 4 and 5 participate. (Bridgeport, Fairfield, Trumbull, Monroe, Stratford, Milford, Devon, Orange and Derby-Shelton). The event was postponed a year ago due to the COVID Pandemic, but will resume on April 7 with the Derby-Shelton Rotary Club hosting the event at the Brownson Country Club in Shelton. Tickets will be $30.00 and more information will be available soon.

The Derby-Shelton Club is honored that John Daniell is this year’s recipient from the Club.

John was born and raised in England, the youngest of 5 children. He studied to be an engineer. His job led him to flight testing both helicopters and jets.  In 1967, Sikorsky recruited him to work in CT. He became a US citizen ten years later. He worked at Sikorsky for 25 years until he retired. But retirement didn’t stop him.  He went on to write for Sikorsky’s historical archives, was a member of their board of directors, and is now a trustee. He is a member of the Vertical Flight Society.

John is also an accomplished sailplane pilot. He has soared as high as 10-12,000 feet “looking for lift” and has competed in many sailplane contests. He is also interested in vintage planes. If you’re interested in aircraft and specifically sailplanes, reach out to John.

While living in VT John decided to join Rotary “to do something more constructive”. In 1994 he joined the Mad River Valley Rotary Club in Waitsfield Vermont, first holding the position of secretary, then serving as president in 1996-1997. He joined the Derby-Shelton Club in 1999 after moving to Shelton. He understands the value of Rotary and helps in any way he can. He is a very active member of the Club and has also been involved at the District Level with Polio Plus, the Foundation, and currently serves on a District Committee reviewing grant applications.