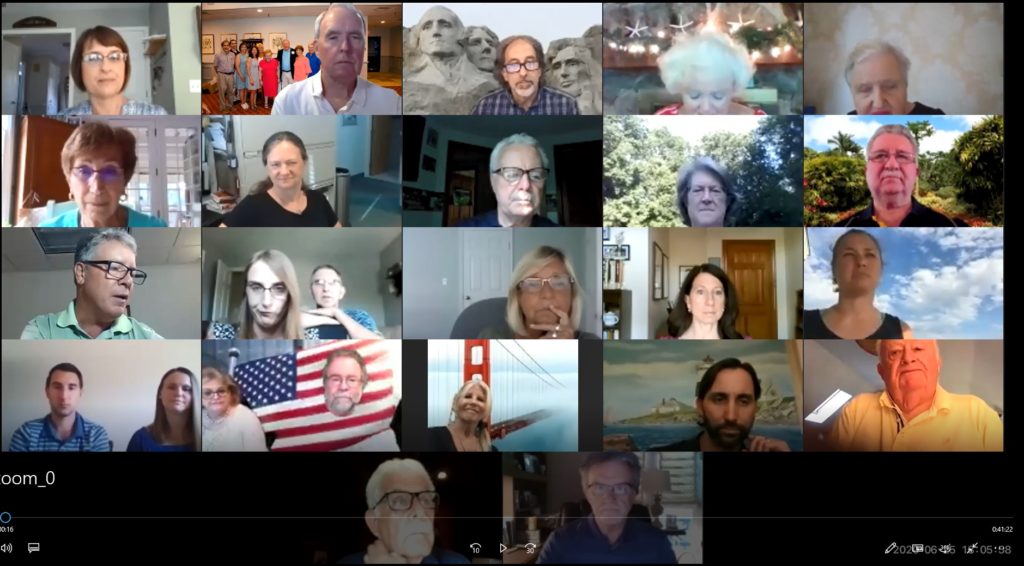 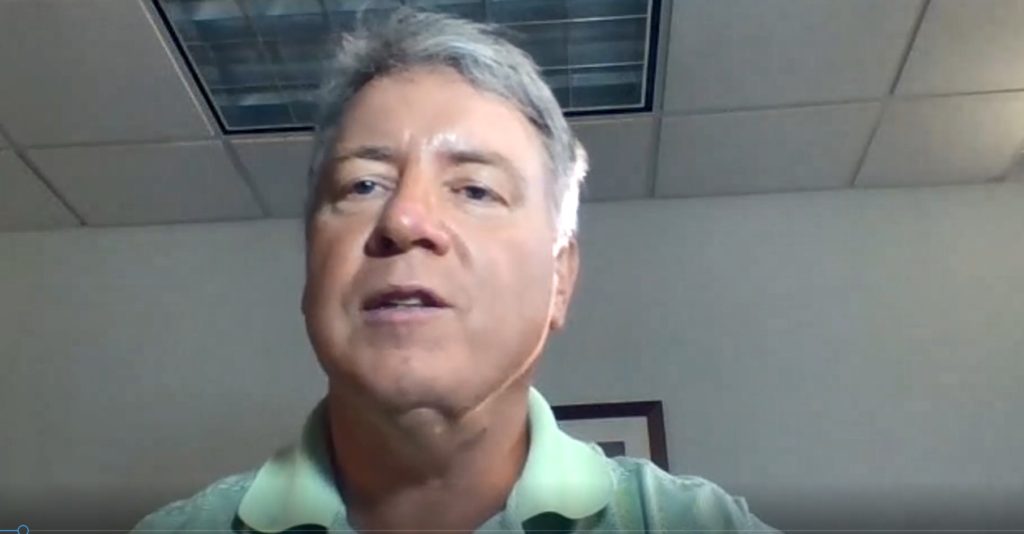 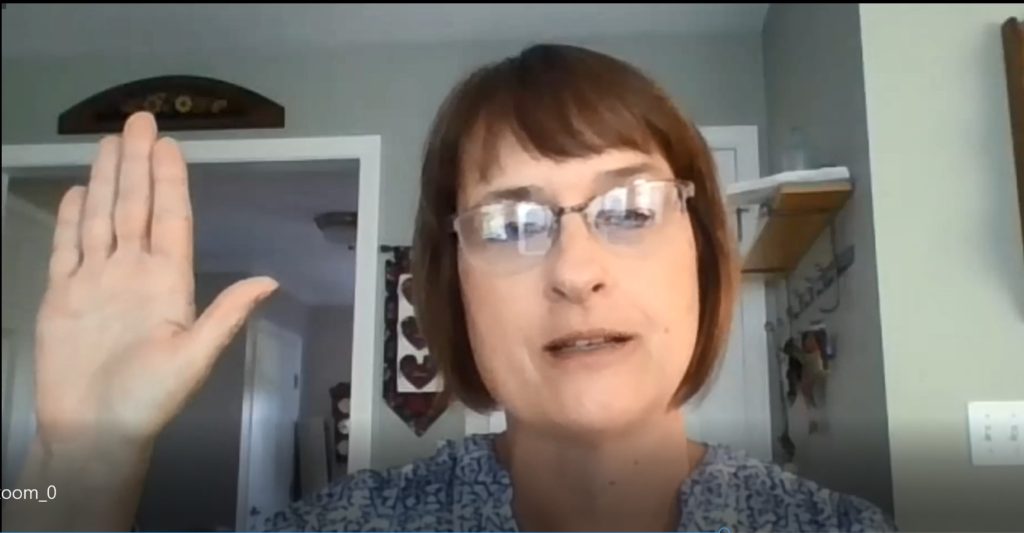 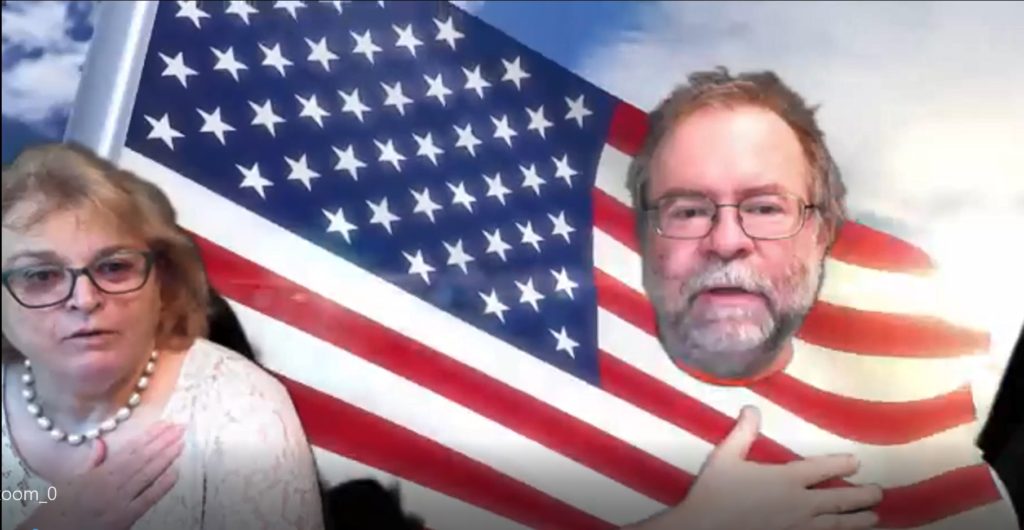 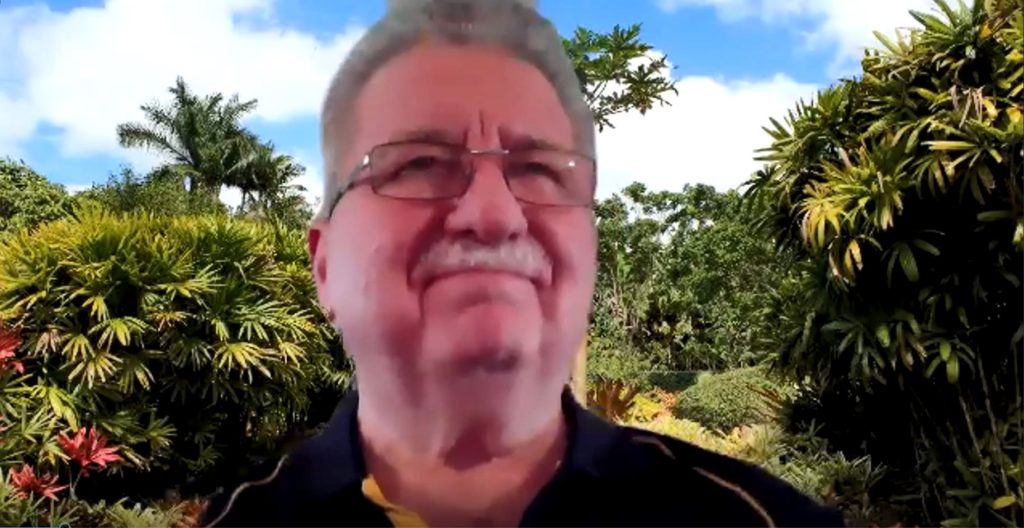 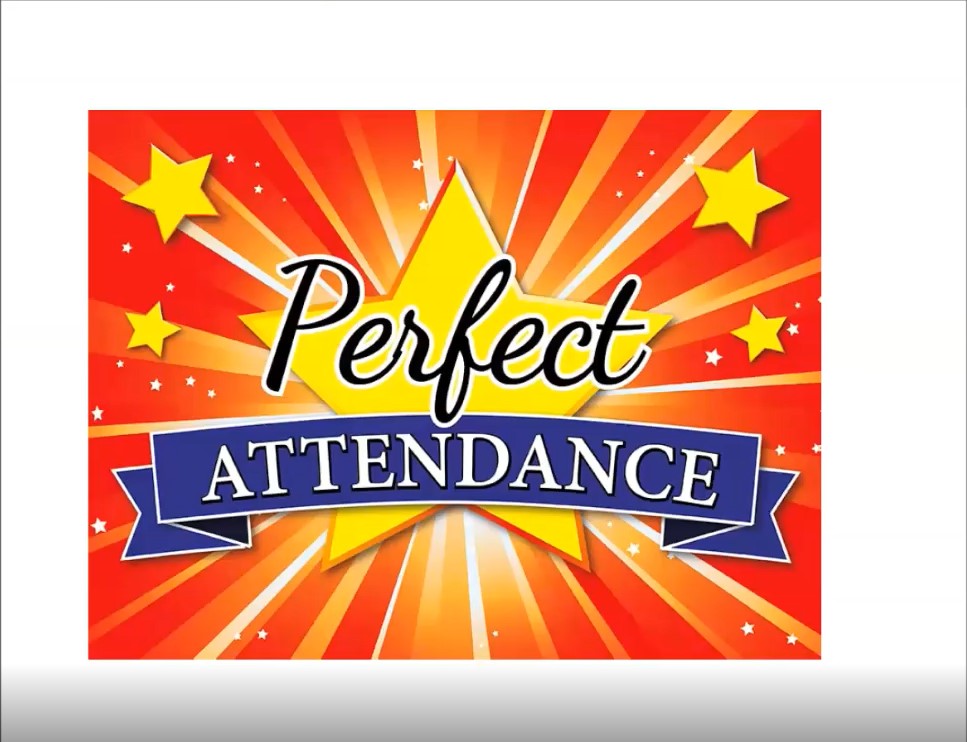 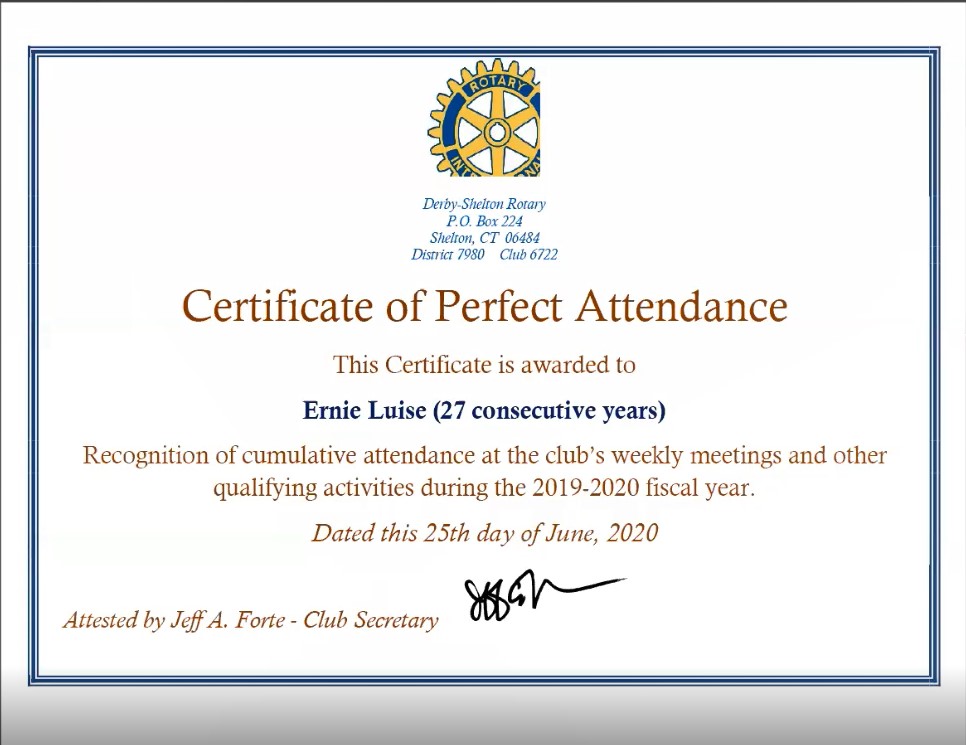 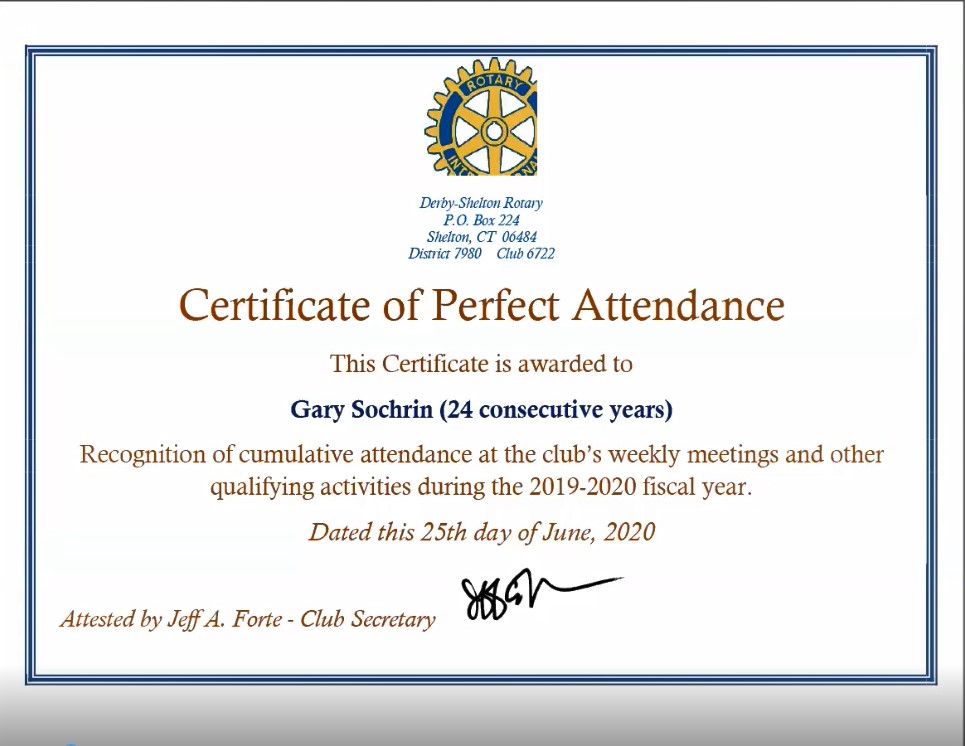 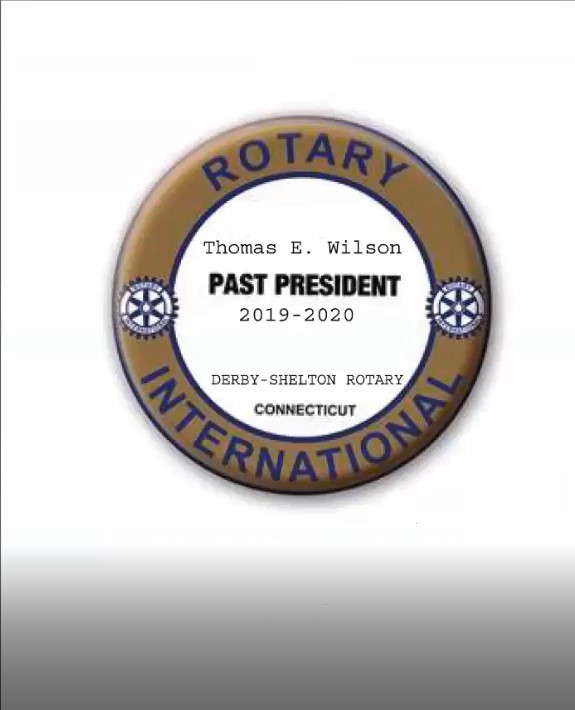 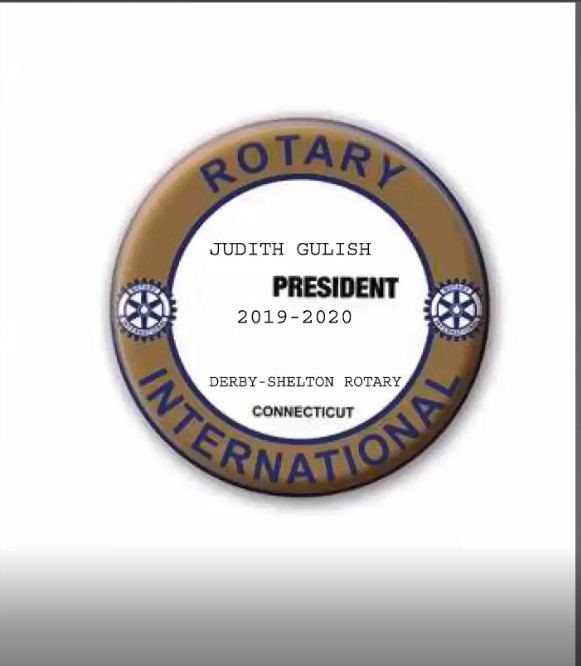 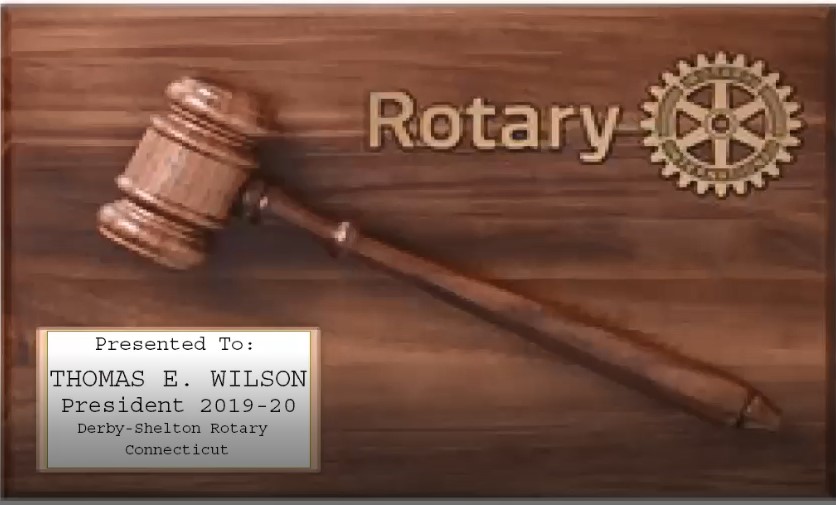 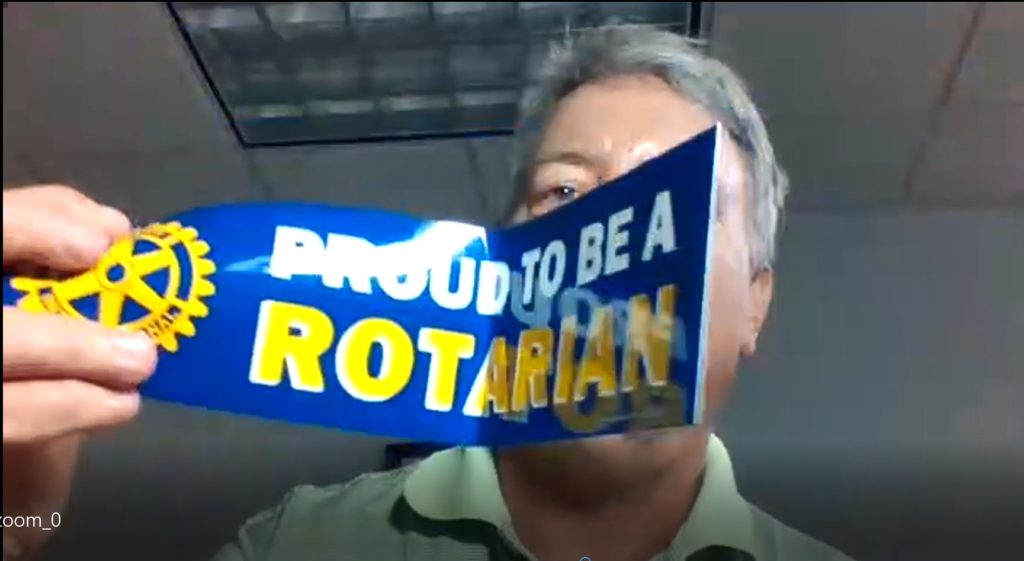 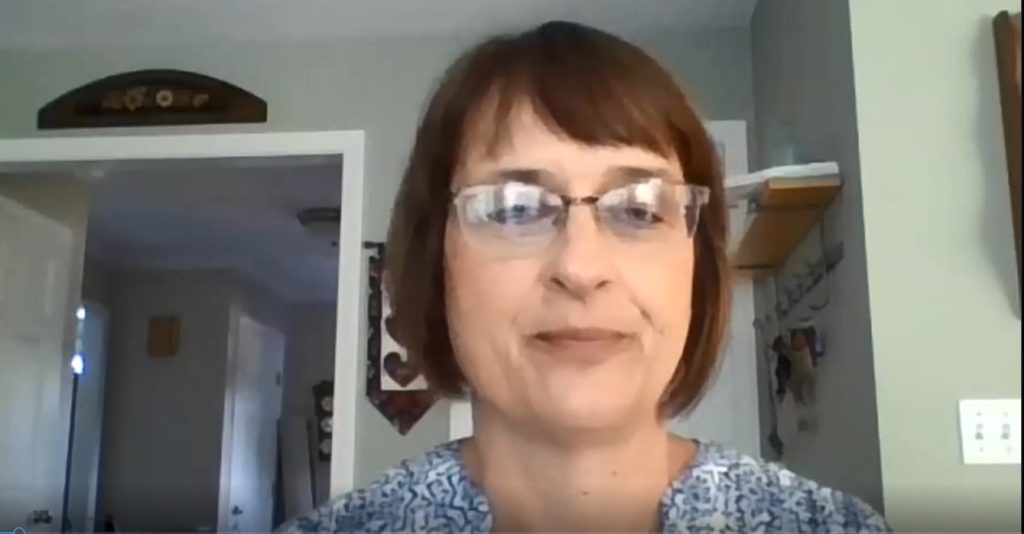 In a sign of the continuing difficult times, Derby-Shelton Rotgary Club said thanks to Tom Wilson for a fantastic Rotary year under very unusual and trying circumstances and welcomed Judy Gulis and her cabinet to begin another. Because of the ongoing coronavirus crisis the Club held its annual installation online via Zoom. That did not dampen the enthusiasm as the the Club was honored to welcome incoming District 7980 District Governonr Ron Webb to conduct Judy’s installation.

Club Secretary Jeff forte did a rather humorous presentation of perfect attendance awards as he tongu-in-cheek addressed the prefect attendance awards. However, the awards themselves were rather remarkable as Gary Sochrin was honored for 24 consecutive years and Ernie Luise chalked an even more impressive 27 years! Though the online version limited the presentation of Past President badge, pin, gavel and chair to Tom to graphic images, the physical items will be presented in person at a later date. Tom then thanked everyone for their support during the challenging year and summarized the incredible achievments of the Club during these trying times. He also announced that Al Patuzzi has now been voted in as an Honorary Lifetime member of the Club.

In her last offical act as Assistant Distric Governor, Cindy wore in the new officers for 2020-2021. They include Betsy Doane (President Elect) Julie Blakeman (Vice President), Kristei Bures (Treasurer}, and Jeff Forte (Secretary). Board members sworn in include Ernie Luise, Justyna Januiek, Drew Scott, John Zseller, Kim Ryan-Caro, Ed Sheehy, Mary Ellen Samatulski, Jack Walsh, and Troy Adcox. Jen Champagne then paid tribute to Cindy for her service to the Club and the District as she heads off to a new life in Florida. Judy has also announced that Joe and JoAnn Shapiro have agreed to serve as Fundraising Chairs.

Then it was Judy’s opprotunity to thank everyone for agreeing to serve in her cabinet and eloquently laid out her vision for the new year highlighting the challenges brought about by the curent environement created by the coronavirus  situation. Instead of focusing on the challenges, she spent her time talking about the opportunities presented by the need to “think out of the box” to maintain our support to the community as we have always done. She finished with the theme of Rotary for 2020-2021 – “Rotary Opens Opportunities”.