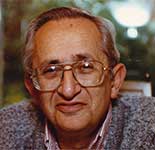 Derby-Shelton Rotary Club members are saddened to hear of the passing of Leo Vine.  Derby-Shelton Rotary Club President Tom Wilson expressed the sentiment of  Club members whe he said that Leo was an, “….Esteemed Community member, Rotarian in every way, and truest of gentlemen.   In my experience Leo was soft spoken offering  advice that  was always  well presented,  succinct, good hearted, and without fail beneficial to all concerned.   Leo had his weekly Rotary meeting a fixture on his work calendar and was truly saddened when health concerns prevented him from attending our meetings.

RIP  and forever Yours in Rotary to our dear friend and Rotarian Leo Vine and our deepest  condolences to Doris and children Harry, Marlene, David, and Steven. Leo served as president of the club in 1964-1965.

Leo Vine, of the Watermark Retirement Community in Bridgeport, CT, passed away peacefully at age 89 on Thursday, April 23, 2020 after a long battle with Parkinson’s disease. Leo is survived by his loving wife of 64 years, Doris Kreiger Vine; his four children and their spouses – Harry and Abby (Friedman) Vine of North Coldwell, NJ; Marlene (Vine) and Steven Ross of Lafayette Hill, PA; David and Risa (Rosen) Vine of Fairfield, CT; and Steven Vine and Laura Goldstein of Newtown, CT; along with his eight grandchildren.

Leo was born in Central Falls, RI, where he was raised by his parents Bessie and Morris Vine. Bessie and Morris, who were immigrants, had one year of grammar school education between them, but valued education. From his humble beginnings, Leo graduated #1 in his high school class and then attended Brown University on scholarship, where he was elected to Phi Beta Kappa and named a James Manning Scholar. While at Brown, he met his future wife, Doris.

After graduating from Brown, Leo won a scholarship to Harvard Law School. Upon graduating from Harvard in June 1955, he and Doris were married. Leo then entered the US Army for his required service, before becoming an attorney in Shelton, CT, where he practiced law for over 45 years.

Leo was an incredibly active, giving member of the Valley community for many years. He served in leadership roles on the boards of the Valley United Way, Housatonic Council of Boy Scouts, Jaycees, and Beth Israel Synagogue Center. He was a Paul Harris Fellow, former president (1964-1965}, and lifetime member of the Derby-Shelton Rotary Club, and a former president and trustee of the Derby-Shelton Boys’ Club. In between all of his many civic activities, Leo was a loving husband, father and grandfather who never missed a family celebration. He always had a smile on his face and a kind word. He was a gentleman in every sense of the word. May his memory be for a blessing.

Leo was buried privately on Friday, April 24 in Shelton, CT. Virtual shivas are being arranged. The family asks that contributions in his memory be made to the Derby-Shelton Rotary Club (www.derby-sheltonrotary.org), CT Food Bank (www.ctfoodbank.org/), or Congregation Beth El in Fairfield, CT (www.bethelfairfield.org).