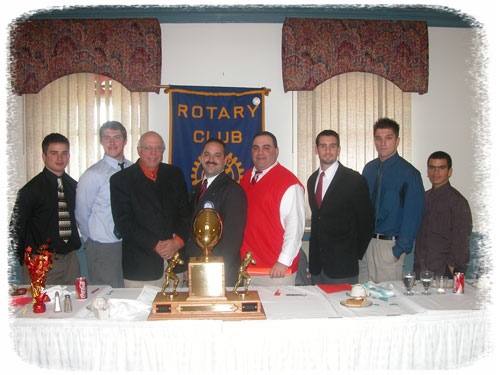 With the ghosts of games past lingering in the room, the 2003 Thanksgiving Day Football Luncheon was held on November 25, 2003 at Dave Grant’s Russian Lodge.  A large audience honored senior members of the football, cheerleading and pom pom squads at Derby and Shelton High School in a prelude to the annual Turkey Day showdown to be played at Ryan Field in Derby. 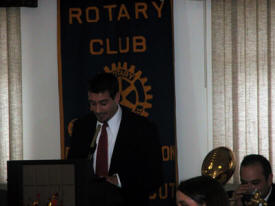 Chris Anderson, head football coach at Woodland High School, graduate of Derby High School and former assistant coach at Shelton High recounted the impact of his Derby and Shelton experiences have had on him throughout his life. 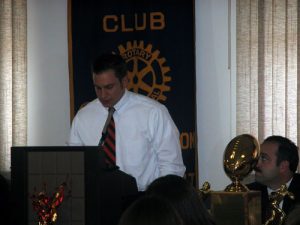 Ron Gydus, a star player at Shelton in the early ’90’s and now a teacher at Sunnyside School in Shelton focused in on the great experiences that he still treasures from participating in the traditional rivalry and urged members of both teams to savor the experience.

In addition to the alumni speakers, the coaches from both schools described their seasons and their hopes for the game and introduced their seniors. Master of Ceremonies Jack Walsh gave an overview of games played in 10 year intervals from 1923 to 1993. He placed special emphasis on the traditions surrounding the game and paid tribute to two participants from the 1963 game in attendance. Derby High School Principal Charlie DiCenso and Shelton High School Athletic Director Jim Benanto were teammates on Derby High’s victorious team. Derby won by a score of 16 to 8 that year when DiCenso blocked a fourth quarter Shelton punt by Ron Gydus’ father Dick and Benanto recovered the ball in the end zone for the winning touchdown. Benanto scored all 16 points for Derby in the game. Walsh noted that both men will be retiring this year, and he pointed to them as examples of the quality of the participants in the game through the years.

Shelton won the game by a score of 32 – 6, and both coaches retired after the season.