In addition to the coaches and team captains, each squad brought back a former player to speak of their experiences. Matt Ramia, a 1994 graduate of Shelton High School and former All Housatonic League player spoke first and recounted his experiences and all that he learned from his years at Shelton High School. Matt recently passed the bar exam in the state of Connecticut and is the son of  Shelton High School headmaster Donald Ramia. Derby’s guest speaker was Rick Dunne who continues to serve his home town as the Economic Development Director for the town. Rick played on a winning Derby team in 1984 and earned the Silver Turkey award for his outstanding play. Rick lauded his former coach Lou DeFillipo and inspired the Derby players with an account of Derby’s inspiring victory over Seymour in 1980 and noted that high school football games are played by enthusiastic teenagers who can accomplish almost anything if they believe in themselves. 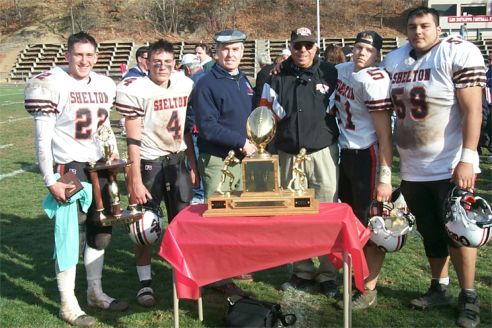 Shelton won the game by a score of 39 – 0. Click here for the story of the game and more pictures.